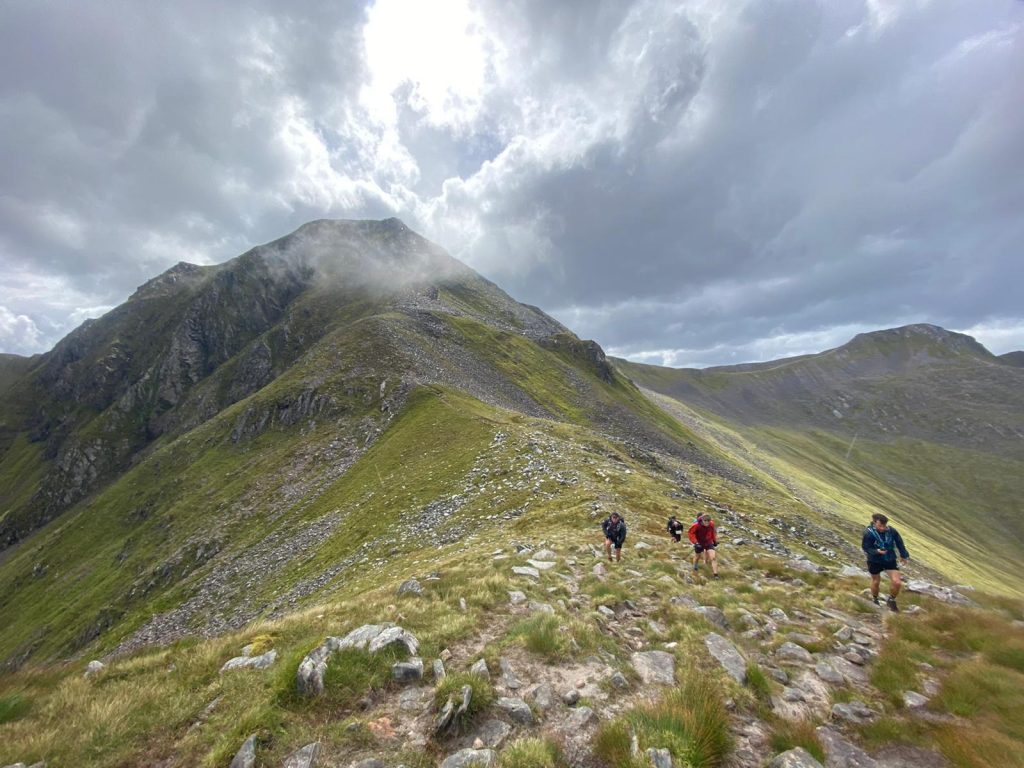 This was the last summit of his attempt at completing the Grand Round: roughly 185 miles of running, 84,000 feet of elevation gain, and over 400 miles of biking. “That was kind of the point where no matter what, I had done it,” says Kelly. “I still had to get down from Ben Nevis, but emotionally that was the moment where I felt I had done it.” At 9:43 pm that evening, Kelly arrived at Glen Nevis Youth Hostel and became the first person to complete the Grand Round in a total of 130 hours 43 minutes.

There are a lot of pictures I could post, and some of those will come. Beautiful landscapes, epic climbs, iconic locations, and amazing people. But this one sums up everything for me. Not just because it’s the final peak, but because I can look at it in different contexts and see nearly everything I felt in that moment and really throughout the whole adventure. Happiness. Anguish. Determination. Despair. Triumph. Disappointment. Gratitude. And a big healthy dose of ‘alright get me the eff out of this torrential wind and rain already.’ This time there will be plenty of time to sort through those thoughts (unless @ultra_damo wants to give it a go and add farcical schadenfreude to the list above). So it might be a bit until my full report on my blog, but this week I’ll post a mini report here for each section of the Grand Round. Thank you so much to everyone who supported me on this adventure, sent encouragement my way, or contributed to the fundraiser. As much as this was my own dream and project, it was the furthest from “solo” as anything I’ve ever done in running and I wouldn’t have even made it out of Wales without that support. Photo: @wayoutsideuk . . . #grandround #paddybuckleyround #bobgrahamround #charlieramsayround #fellrunning #hillrunning #mountainrunning #wales #england #scotland #ultrarunning #ultrabiking #adventureiseverywhere #exploreyourunknown #createyourpassion #foryourmountain #selfpropelled #howihammer #yoursecondskin #tweet

“I can kind of see the 53 different emotions I’m experiencing at that point in time and then from there it was just kind of a long, drawn-out formality of OK let’s get to the finish and eat something and sleep.”

The Grand Round is a challenge of Kelly’s own creation linking the three most challenging long-distance mountain rounds in the UK—Bob Graham, Paddy Buckley, and Charlie Ramsay—and cycling between them. Each round in itself is a huge accomplishment and for the average person, tend to take a full week-long backpacking trip.

A round is a peak-bagging run that starts and finishes at the same place, usually completed in 24 hours. “In fell running there aren’t really trails and people are free to run anywhere, so there’s a great deal of creativity and imagination that can go into these rounds. Many rounds are named after the runner who first created the set of peaks to include and some have become long-established and highly sought after goals,” says Kelly.

The Bob Graham Round was first completed by Bob Graham in 1932 and has been completed by thousands of runners since (Kelly became a club member 2,289 last year). “The rounds truly capture the incredible passion, tradition, and imagination that are part of the fell running community.”

Kelly is coached by David Roche, who was awestruck by the ambitious mission and says, “The Grand Round is one of the most epic goals ever attempted. I would almost call it unthinkable, in that no one really thought to do it until John came along.”

This was Kelly’s second attempt to complete his mission, as his first attempt in May 2019 was unsuccessful. This year, Kelly had made some significant changes to his schedule, prioritizing sleep and giving himself an extra 20 hours in his plan to complete. He also did it just weeks after running the Pennine Way.

The Grand Round is the second leg of what Kelly named “The Hartley Slam” in honor of fell (also known as hill) running legend Mike Hartley. In the first part of the Hartley Slam, Kelly nabbed a (short-lived) FKT on the Pennine Way, shaving 40 minutes off Hartley’s 31-year-old record.

Kelly’s original plan for the Grand Round was to complete each of the big rounds within 24 hours consecutively and cycling between each one. Unfortunately, Kelly had to abandon his sub-24-hour goal for the Charlie Ramsay Round as tropical storm Ellen battered him. “My temperature just plummeted,” says Kelly. “Everyone was tossing every layer they could on me and I did have to accept the fact in that moment in the conditions I could no longer finish that final round in under 24 hours.”

However, even in that moment, he never once let himself doubt whether or not he’d make it. Letting go of the 24-hour goal, Kelly solidified his resolve to finish regardless of time. “John has cultivated a fire within himself that can’t be put out by terrible conditions, brutal courses, or unreal distances,” says Roche.

Kelly did these running feats in part to test his own capabilities and discover more about himself through long, grueling days on the mountain. At the same time, he’s also been raising money for the Stephen Lawrence Charitable Trust which supports young people overcoming disadvantages and discrimination. As of now, he’s raised 90 percent of his £15,000 goal.

Moving forward, Kelly has a number of ideas for what comes next, but no specific plans yet. “There are some places that I have some unfinished business,” says Kelly. Namely, Kelly mentioned the Tor Des Geants and the Pennine Way, but for now Kelly is recovering and getting ready to welcome a new baby to his family.

Johanna Flashman is a freelance writer with a passion for outdoor adventure, travel, and sustainability. When she’s not writing, rock climbing or running, Johanna loves to learn new skills, from website design to bikepacking.